Deeply-held beliefs can be hard to overcome, no matter the evidence. But they should still be challenged when there is data available. Which gender is most likely to interrupt and dominate the conversation in meetings…?

In the past month the head of the Tokyo 2020/21 Olympics organising committee, Yoshiro Mori, was quoted as saying that women talk too much and meetings with female board members would “take too much time.” [1] At the time, his own board of 24 people consisted of five women and nineteen men. In 2019, the committee had set a goal of increasing the number of women on the board to 40%, which meant there should be at ten, not five women… Mori is also quoted as saying, “If we increase the number of female board members, we have to make sure their speaking time is restricted somewhat, they have difficulty finishing, which is annoying.”

So, is there any evidence to challenge this claim?

According to research summarised in the Washington Post [2], in a group of five people making democratic decisions, if only one member is a women she is likely to speak 40 percent less than each of the men. Even if the group has a majority of three women, they each speak 36 percent less than each of the two men. Only in groups with four women do they each finally take up as much airtime as the one man. Women are also far more likely to be interrupted. Research back in 1975 showed that men accounted for 46 out of 48 interruptions in a mixed-gendered group and a recent study of the behaviour of Supreme Court justices found that “in the last 12 years, during which women made up, on average, 24% of the bench, 32% of interruptions were of the female justices, but only 4% were by the female justices.” [3]

Mori was not making a fact-based observation, he was expressing an opinion that revealed a not-uncommon but unfounded bias. Women are chatter boxes. Women talk too much. Women gossip. Women get emotional… the implication being that men do none of these things. One of the benefits of the mass digitisation of conversations is that there is ample data to prove these assumptions wrong. Changing attitudes is not so easy… 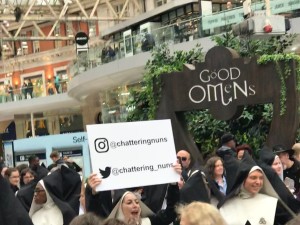 Banner image: Author’s own photo. The commute home was serendipitously and pleasantly disrupted on 29 May 2019 by Good Omens at Waterloo station in London. The Chattering Order of St Beryl singing Queen hits to promote the launch of the TV series.