The near-pervasive adoption of mobile devices and the growing use of sensors embedded in physical environments are enabling a new generation of models for studying human-environment interactions.

On 8th July 2020, I successfully defended my doctoral thesis ‘Modelling socio-spatial dynamics from real-time data’. It was the culmination of four years of research spanning cognitive and spatial data sciences and drawing on contributions from environmental psychology and human geography to model people-place interactions. This article is a brief introduction.

“The most profound technologies are those that disappear. They weave themselves into the fabric of everyday life until they are indistinguishable from it.” – Mark Weiser, 1991

In 1991, computer scientist Mark Weisner coined the phrase ‘ubiquitous computing’ in his article ‘The Computer for the 21st Century’. He envisaged a future when computers become small enough and powerful enough that they disappear into the background, becoming part of everyday life. Fast-forward 20 years and adoption of smartphones was accelerating. In 2011, 27% of UK adults owned a smartphone. Five years later, the number had risen to over 70% and the internet of things (IoT) was gaining in popularity. In 2015, it was estimated that there were over 15 billion internet-connected devices, double the global population of people, with a prediction that the number would grow to 30 billion by 2020 and over 75 billion by 2025.

The rising use of mobile and embedded technologies in physical landscapes and everyday activities formed the backdrop for this research. Since the beginning of the 21st century, there have been substantial advances in the use of computational methods to predict real-world phenomena, from improved weather forecasting to predictive policing to detecting man-made seismic activity worldwide. However, little is said about the environment when and where the events take place. The image in figure 1 shows a couple walking along a street. It looks like winter and there appears to be a market to the left. 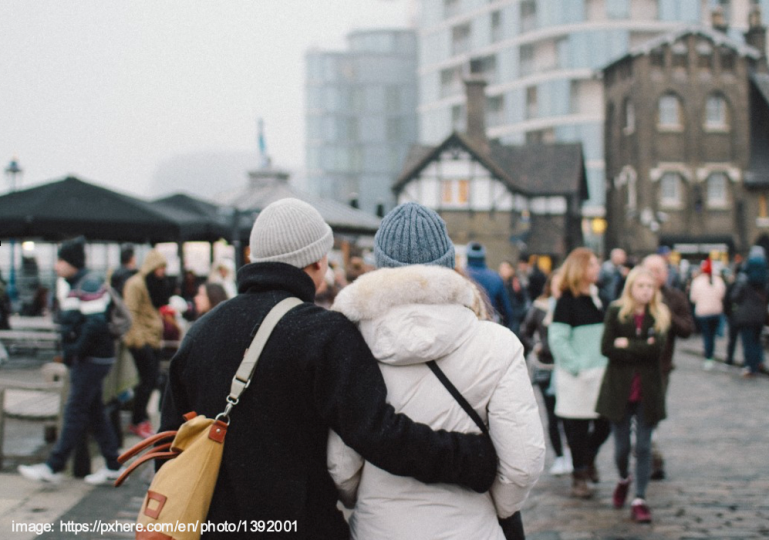 How typical is the scene in figure 1? Is the street busier or quieter than usual? How much does it vary across the time of day, day of week or month of the year? Does the weather have an effect? These questions were encapsulated in a quote at a 2016 conference on crime, policing and citizenship (CPC): we are getting better at predicting when and where an incident may occur but know little about the local population affected or at risk, relying instead on static measures such as the residential population from the most recent census:

The hypothesis of my research was that the data being emitted in real-time from mobile and embedded devices could be used to produce a street population measure. Furthermore, frequent access to such data could be used to develop a model of the social dynamic of the landscape, revealing the variations in activity at different times and for different conditions. Finally, the richness of such data sources could potentially reveal more than a local population count but also changes to actions and experiences such as dwelling within versus moving across a landscape.

To quantify how behaviour changes within the same physical landscape, I proposed a three-tier hierarchy of context (figure 2).

The first level is the spatial baseline, the physical ‘affordances’ of a landscape that create the potential for interactions to occur, as defined by psychologist J. J. Gibson. A park will produce different behaviours compared with a shopping mall. The second level identifies how behaviour changes in a recurring cycle due to climate and cultural constraints that create the ‘opportune’ time to act, as defined by geographer Torsten Hägerstrand. Most urban landscapes exhibit diurnal rhythms, with increased outdoor activity during daylight hours. Within the UK, the most common working pattern is a five-day week from Monday to Friday. The third level identifies the variable conditions that can disrupt routines. Extreme weather can deter outdoor activities. Parks may be used for infrequent large-scale events such as festivals and music concerts that temporarily attract substantially larger crowds. A context is created from the set of circumstances spanning these three levels.

In the 1930s, psychologist Kurt Lewin posited that all behaviour arises from a complex interaction between person and environment, expressed as the formula B = f(P, E). For my research, I proposed extending that formula to acknowledge the hierarchy of context and focus on population behaviours, creating the P-STAR formula: Pb = f(S, T, A, R), where a population behaviour (Pb) can be measured as a function of the spatial baseline (S), temporal routine (T) and situated adaption (A) for a given context within the landscape. These three levels describe the environment in which behaviour occurs. However, there is also a fourth element, reaction sensitivity (R). People may react in different ways to the same environment due to personality traits and their reasons for being present. There is always uncertainty when forecasting social phenomena and the range of uncertainty will vary for different sets of circumtances. Figure 3 shows the P-STAR formula in action.

Figure 3: The P-STAR formula in action

The baseline is a static value for a given space (S) irrespective of time or variable conditions. Incorporating time (T) converts the static measure into a dynamic distribution. Learning the impact of different situations makes it possible to adjust the curve to reflect how behaviour changes in response to abnormal conditions (A), with a range (R) to acknowledge the uncertainty in any forecast of any real-world phenomena that is sensitive to initial conditions.

The challenge historically has been acquiring sufficient data to measure differences in population behaviours over time and for different conditions at street-level. Different landscapes will have different baselines, temporal rhythms, abnormalities and sensitivity to change. This is the opportunity created by mobile data. My research utilised a range of mobile data sets to develop the P-STAR framework, building a series of practical models, from producing active population estimates to visualising social atmospheres and developing contextual dictionaries from the language expressed in location-based social media.

Presenting the results from the models is for another post. The outcome of the research was a framework that uses advanced computational methods to reveal how context can change behaviour in urban space. A key benefit of frequently sampling mobile data is the ability to automatically recalibrate parameters over time, ensuring a model remains tuned to the landscape it is being applied to. Whereas many of the advances in artificial intelligence have made use of large volumes of historical data as training sets, this approach uses only data generated recently within the landscape, what I refer to as ‘little big data’. It requires no long-term storage and the model self-calibrates as new data is received and old data decays in value.

The greatest contribution science can make to the humanities is to demonstrate how bizarre we are as a species, and why.”
– E.O. Wilson, 2014

The quote by biologist E.O. Wilson articulates the aims of this research, to move from a focus on generalised models to context-specific learning. For many years, biologists, anthropologists and psychologists have argued that we are unlikely to produce elegant equations to model human behaviour. Instead, what’s needed is an adaptive toolkit that incorporates context and embraces uncertainty. We now have the technology, and increasingly the data, to develop such models. However, there remain many challenges. Some were anticipated at the start of the research, whilst others were discovered along the way. But perhaps the biggest challenge is the need to unite physical with social sciences and quantitative with qualitative methods. There are those who believe social phenomena cannot be quantified with sufficient rigour to be considered scientific. Regardless, the use of AI in real-world decisions continues to increase and generalised models are often ill-suited to handle the messy realities of everyday life. We urgently need a language for representing and communicating social phenomena with the same acceptance as that used for natural phenomena. This research is a step in that direction.

This is just a brief summary of the core contribution of my doctoral research. More details will follow in future posts. To close, I must thank my supervisors, Professor Andrew Hudson-Smith and Dr Hannah Fry at the Bartlett Centre for Advanced Spatial Analysis, University College London (UCL), and my examiners Professor Stephen Marshall for UCL and Professor Dave Martin from Southampton University. The viva normally takes place in person since it is an oral examination, closing out with a group photo. However, this one took place during the COVID-19 global pandemic and so was conducted online, meaning the group photo was a screenshot of our respective webcams. And no, I’m not in the main picture, that is the inimitable Dr Hannah Fry.

If you are interested in finding out more about this research or have any questions, please contact me. An online form and contact details can be found under Contact in the menu at the top of the page.

Declaration: Links to books on Amazon contain affiliate links. I will receive a small percentage of the sale if the book is purchased via this link.

Banner image: pedestrians walking along a street, released free of copyrights under Creative Commons CC0, as of 10 July 2020. Source: https://pxhere.com/en/photo/1392001