This is a part of a series of posts analysing the data being published about the spread of COVID-19. The focus is on the cumulative number of deaths reported. If you find such data upsetting, please do not view this post.

This post examines the COVID-19 data by focusing on different approaches to monitoring counts and comparing countries. The focus is on reported deaths rather than confirmed cases because the latter is dependent on how much testing is being performed, which appears to be varying substantially between countries based on news reports. This is a sensitive source of data. Please do not read on if you find such statistics upsetting. The purpose is to show just how challenging it can be to interpret data about a real-world phenomenon, and how making an adjustment to the scale for comparing countries can produce a different visualisation.

For details about the data sources and preparation, and to view the most recent data updates, view COVID-19: Daily Updates. The plots presented are based on data as of 29 March 2020.

The following charts examine how comparisons between countries change if you change the starting point used to align them.

In the related post COVID-19: 28 Days Later, countries were initially compared per continent from the date of the first reported death attributed to COVID-19 for each country. Within Europe (and world-wide), France stood out for having a longer period of low counts before experiencing a similar rise to other countries.

b) day 1 is when at least 10 deaths are reported 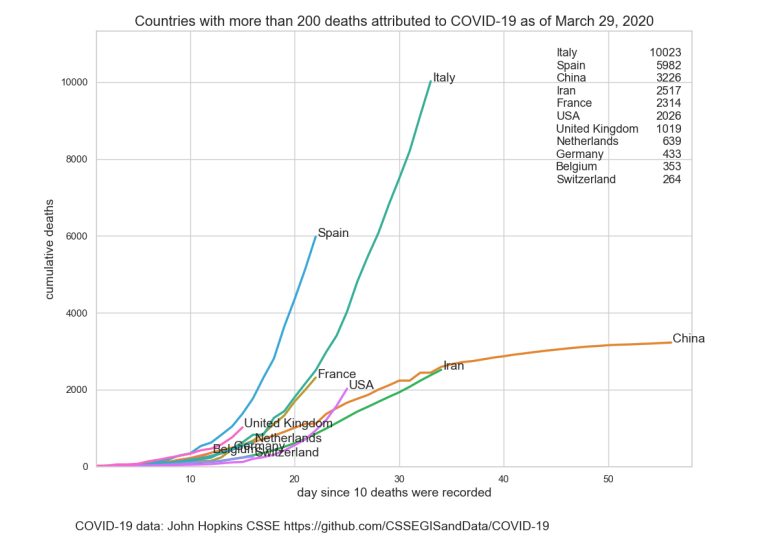 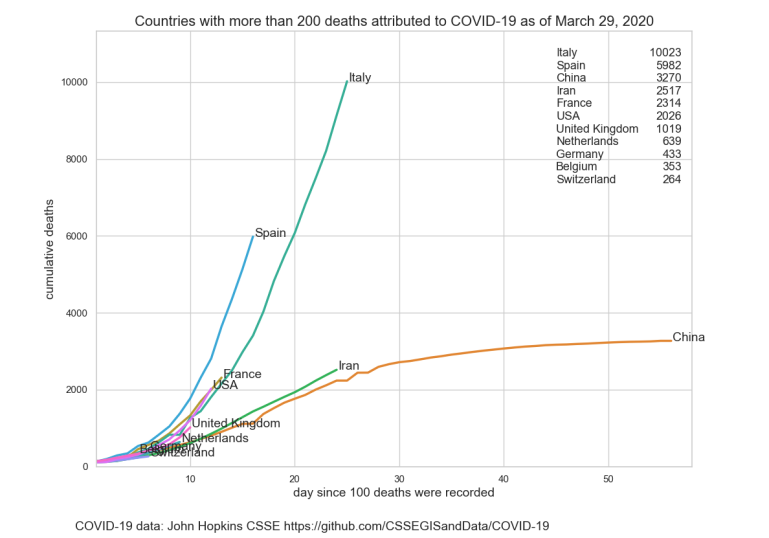 The above charts plot actual counts. However, the number of people that can be infected by COVID-19 within a country will depend on the size of the population and the distribution of the population across the land area. An alternative approach is to scale counts to accommodate for differences in population size.

The following table shows some basic statistics per country that may affect the spread of the virus.

The following chart shows the number of deaths attributed to COVID-19 per hundred thousand of the population for each country. This is using the same starting point as chart c) above: day 1 is when at least 100 deaths have been reported.

Incorporating population size gives an indication of scale. Italy has, up to 29 March 2020, experienced nearly 17 deaths per 100,000 people whilst the USA has experienced less than 1 death per 100,000 people. The USA curve looks more like Iran than Italy when scaling by population size. Belgium, Switzerland and the Netherlands are all experiencing earlier rises on this scale. France is on Italy’s trajectory as is the UK albeit just behind in terms of the number of days since more than 100 deaths were first recorded.

However, scaling by population can also mislead. A country with a smaller but denser population would likely experience more rapid and higher rates than a large country during the early stages of a virus spread by social contact. However, a large country could have areas – cities – where the population is just as, if not more, dense than smaller countries and of a similar size but the effect will be diluted when comparing countries. An alternative measure would be to use population density – divided the population by the land area for the country. 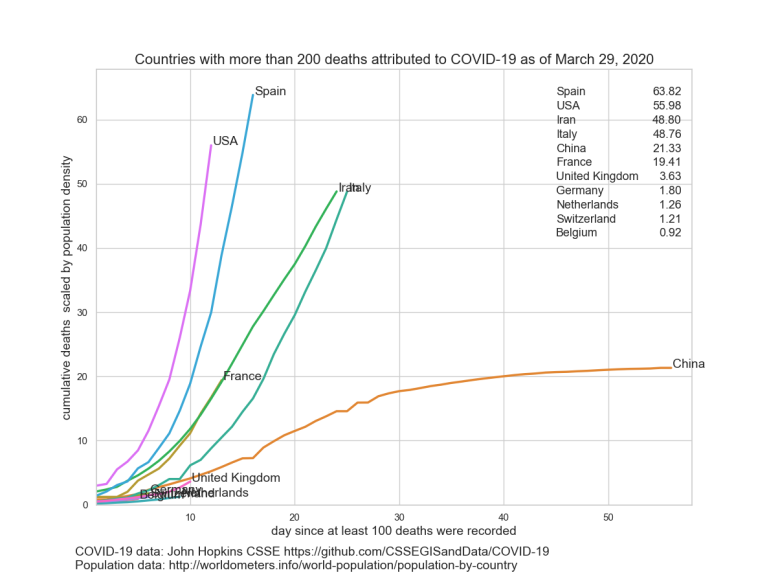 Whereas scaling by population size penalises smaller countries, scaling by land area penalises larger countries that have substantial areas that are uninhabited or scarcely populated and are experiencing localised clusters of COVID-19 infections. In this instance, the USA now looks more like Spain and Iran looks more like Italy. Both the USA and Iran have low population densities when averaging the population across the entire land area of the country.

So does scaling the count provide more information than using actual counts? When studying a real-world phenomenon that is not evenly distributed over space and/or time, scaling can have limited value unless the scaling method also reflects the distribution of the phenomenon. In this case, we are looking at the rates for an entire country when infections appear to be clustered locally within the country, predominantly in urban areas that would have a higher population density than the average across the country. We need data that can incorporate that variation in the scaling method.

An alternative approach is to try and identify whether or not countries can be categorised based on shared attributes. When comparing countries from when each first reported more than 1,000 deaths, two distinct curves are visible. Can those differences be explained by differences in the attributes for each country and/or approaches taken to contain the spread of the virus?

Assuming that reporting is accurate (and there is no way to verify it), one way to investigate the differences in the curves is to compare the countries based on different attributes and see if there are patterns that may help explain the different curves. The following charts are based on the values in the table presented earlier.

The chart below shows the distribution of countries when comparing land area and population size.

It is immediately evident that the USA and China are very different to the other countries in terms of both population size and land area, and even Iran sticks out compared with the cluster of Western European countries.

The chart below plots the same data points but excludes China and the USA.

The Netherlands, Belgium and Switzerland all have much smaller populations and land areas. This could perhaps explain why their curves appear to be more rapidly rising when scaling counts by population size. However, whilst the Netherlands and Belgium have much higher population densities than the other European countries, Switzerland is lower than both Germany and the United Kingdom, so we can’t be certain. The landarea_km2 value is the total land area for each country. A better measure might be the total inhabited land area for each country. Switzerland includes a substantial mountain range that could mean urban population density is closer to Belgium and the Netherlands.

We do have the statistics for how much of the population is urbanised, and the median age of the population. Both are factors that may influence the spread and impact of the virus. The chart below shows the countries plotted on these two factors. 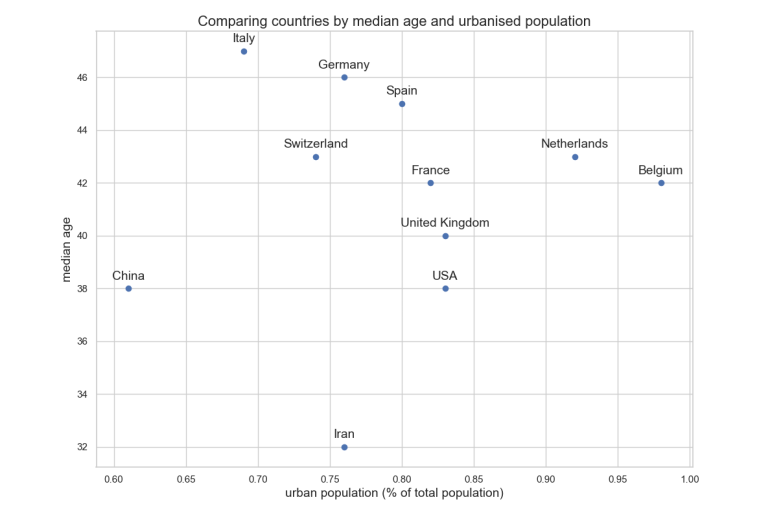 On this plot, China and Iran appear to be outliers. Germany appears to be on the same line as Italy, Spain, the Netherlands and Belgium yet is not experiencing the same impact of the COVID-19 virus so far.

The reason for including these scatters is to show that, even with some simple attributes, it becomes possible to see differences between countries but also that it is important to consider the underlying data. Land area is perhaps not effective for calculating an average population density. We need a measure of the land area that is inhabited per country. And even then, perhaps need a separate measure for urban and rural density. However, sticking with the data we have, China is an outlier when plotting against attributes and rates of Western European countries, as well as when plotting actual counts. It is unlikely to provide a reliable indication for how other countries will progress. And that is before considering and comparing containment strategies, when they were implemented and the different approaches taken within different countries. And the plots are all based on an assumption that the data being reported is accurate. It gives an indication of just how difficult it is to build a model that is reliable and representative of a real-world phenomenon.

In terms of comparing the impact of COVID-19 between countries, it appears to be more reliable to start the count from when at least 100 deaths have been recorded to give an indication of how countries compare. Looking at the charts comparing from 1, 10, 100 and 1,000 deaths attributed to COVID-19, it appears that some countries have failed to identify the first death caused by COVID-19. This is important to consider for other countries currently reporting no or low counts. An early assumption of achieving control over the virus could lead to a premature relaxing of containment policies with terrible, and avoidable, consequences.

The different curves produced when using different scaling measures emphasise the importance of carefully viewing any visualisation before drawing conclusions. Pay close attention to the labelling and values on the axes to understand what is being plotted. Scaling may be more appropriate when evaluating how different countries are likely to experience a spread of the virus, and it may be possible to build a model to study developments per country in more detail given more data about attributes that can affect the spread. But for a simple visual to monitor and compare countries as the pandemic unfolds, actual counts are sufficient.

Banner image at top of post by mattthewafflecat from Pixabay