In this post, we take a look at the mobilisation data for each fire station to calculate the time and distances involved in responding to incidents, before looking at the differences in spread of incidents across wards 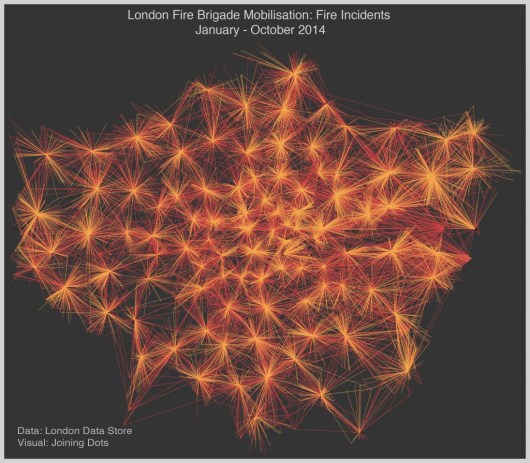 In the image above, all mobilisation activities are plotted from station to incident for fire-related incidents. Red for primary, Orange for secondary. Click here to view the plot overlaid across an OpenStreetMap of London.

The image below shows the locations of the stations currently open across Greater London. 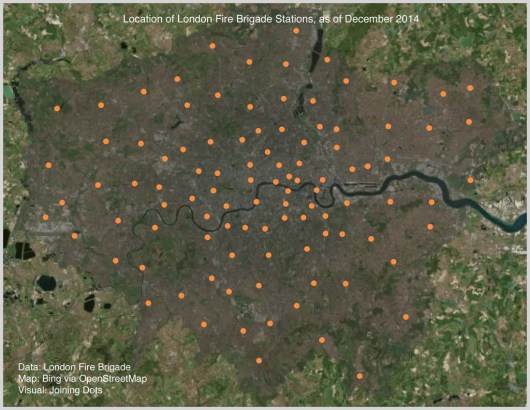 In this post, we are going to look at the time and distance involved in attending incidents. To do this, two sets of data have been merged – mobilisation records and incidents records. Both are published on the London Data Store. Distances has been calculated using the Manhattan formula from each fire station to each incident. Fire station locations were determined using postcodes published by the London Fire Brigade, converted to coordinates using MapIT.

The following bar charts show the averages and totals for time and distance committed to attending incidents during the first 10 months of 2014. All charts are using the same legend and colour code for incidents:

The bar charts above show that whilst false alarms take up less time and distance on average per incident, the volume means they dominate when looking at the total figures for all incidents. The only exception being the time actively attending to an incident. No surprises to see that fires take longer to deal with in total. On average, floods and road traffic collisions are on a par but their volume is significantly smaller.

The following pies show the percentages for the three main incident categories and more clearly show the overall effect of fires on resources:

Whilst fires are the smallest incident group by volume of incidents, they result in more distance travelled than Special Services – mostly because multiple stations are often required to attend a fire. And in terms of time spent actively attending incidents, they nearly catch-up with those false alarms.

To give an idea of the numbers regarding false alarms. From 1st January to 31st October, automatic fire alarms triggered incorrectly were responsible for 140,000 miles travelled and 760 days of station time.

Finally for this post, the three images featured at the start… 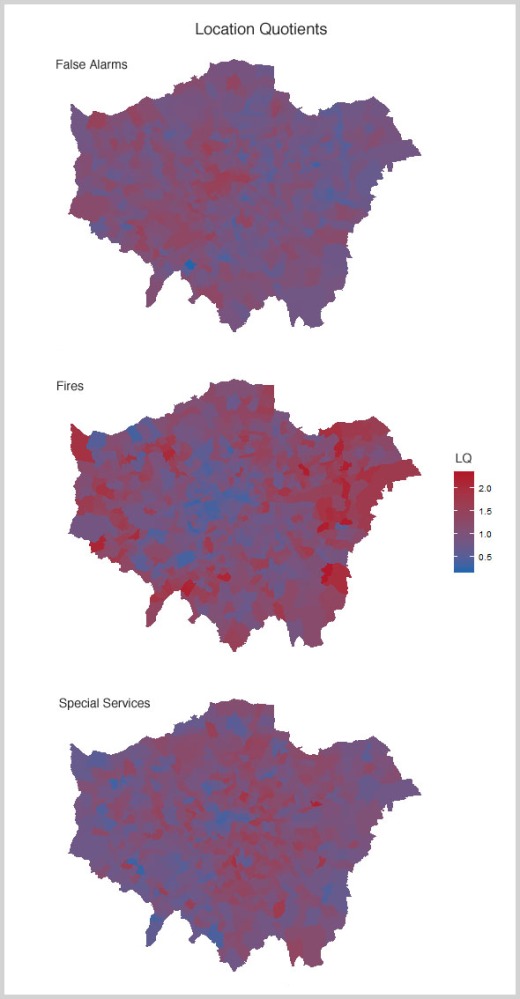 Each image is plotting the location quotient for the Incident Group by ward, showing areas that have an above (red) or below (blue) rate of incidents relative to other incident groups in the ward when compared across all wards in London. It’s interesting to see that wards to the east have a higher rate of fires than other areas, whilst false alarms dominate the centre.

The following image shows the breakdown further by sub-category: 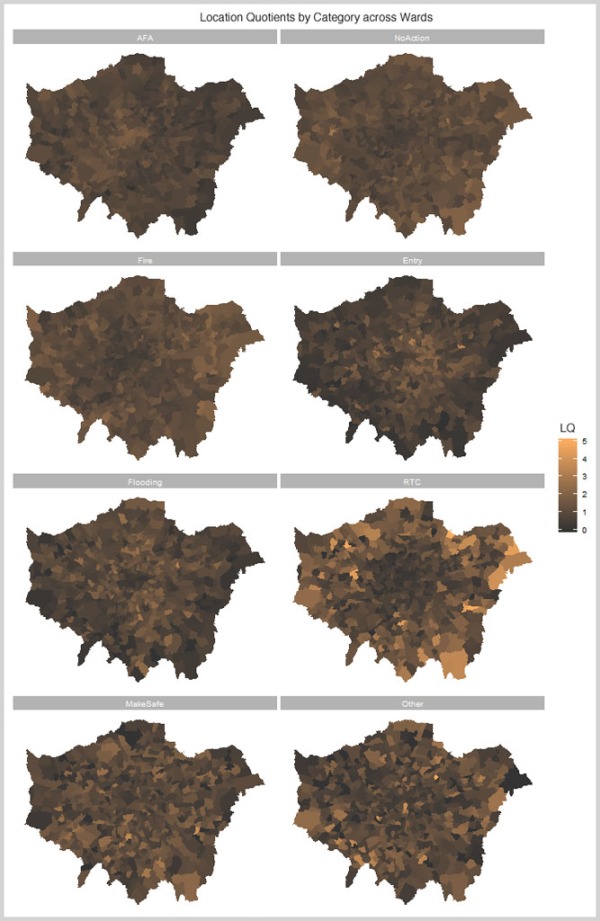 No surprises to see road traffic incidents are well above average in the outer areas of London close to motorway junctions, and below average in the inner wards where people are less likely to travel by car. The first two maps are interesting – showing false alarms triggered by automatic fire alarms (AFAs) and false alarms received as calls or calls where no action was required. You can see a correlation between the lighter area to the centre and south west on the AFA map and the darker equivalent on the second map. This shows a more granular differentiation than simply looking at the volume of incidents shown in Visualisations Part I.

All these charts were created from the London Fire Brigade records shared on the London Data Store, with the addition of postcodes for fires stations retrieved from the London Fire Brigade web site to estimate distance from station to incident. And this plus the last two posts has just scratched the surface of the analysis options available. Such analysis can lead to better decision making by highlighting how wards differ not just by volume of incidents but also the spread of different incidents and demand levels across space and time. Potentially resulting in better allocation of equipment needed for different tasks and improved shift patterns for fire-fighters rather than following the standard ‘one size fits all’ timetable.

There is little point in capturing such data if we don’t use it to make smarter decisions than the ones we would otherwise choose.