In the second post looking at the 2014 incident records published by the London Fire Brigade, we explore if there are any spatial patterns 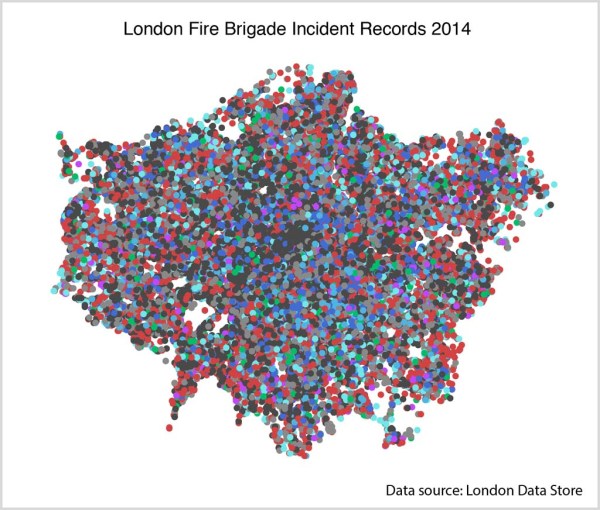 In this post, we’re going to look at the London Fire Brigade (LFB) incident records for 2014 from a location perspective. The image above is a plot of the coordinates recorded for every incident from 1st January to 30th November 2014 within the Greater London area, coloured by general category.

A reminder of the percentages:

Note: the total numbers have reduced slightly as we are only looking at incidents recorded within the Greater London boundary.

The data is going to be plotted by ward, with the 25 wards within the City of London merged into one. There have also been adjustments to the wards in Hackney, Kensington & Chelsea, and Tower Hamlets. Some data munging was necessary to get the fire records into plottable shape.

For anyone not familiar with the layout of London, here’s a visual overview of the boundaries:

It helps to know some of the key areas for some context in the following choropleth maps, showing number of incidents across 625 London wards: 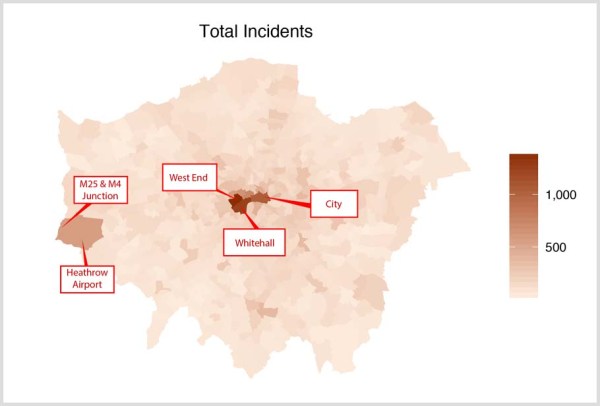 Each incident category has been plotted individually below, so note the different scales on each choropleth. The emphasis is on the variation in spread of incidents:

Just from plotting the number of incidents by category for each ward shows a few patterns of interest. False alarms triggered by automatic fire alarms are very much clustered in the centre of London, in the wards containing central government buildings, a fair few tourist attractions, theatres, the busiest shopping areas and the central business district (CBD). Calls that turn out to be false alarms or no action required are more spread out, but the ward lucky enough to house both Heathrow airport and one of the busiest sections of the M25 motorway is clearly visible. Given the flooding incidents do not follow the path of the river Thames, it seems the flood barriers are doing their job…

Some of the property categories are quite varied. ‘Other residential’ includes hotels. Non-residential includes at least one garden shed but is mostly workplaces, education, sports, retail and entertainment premises. Outdoor structures range from a wheelie bin to a bridge… But it is still interesting to see the variation in spread. Incidents involving non-residential buildings are very much concentrated in the city centre. For residential dwellings, incidents are more widely spread. Whilst there is more than one airport within the boundary, it appears all aircraft-related incidents have occurred at Heathrow in 2014. The spread of boat-related incidents indicate where you can find rivers, reservoirs and lakes in the London area.

For those interested in how the visuals were produced, everything was created in R Studio and tidied up in Adobe Illustrator. Plots created using the ggplot2 package. Colour gradients for the choropleth maps based on the ColorBrewer schemes. Map overlay tile created using the OpenStreetMap package. London Wards shape files provided by the UK Data Service. London Fire Brigade Incidents data provided by the London Data Store.