The arrival of new technology leading to new ways of working can lead to assumptions that something is being created versus the invisible becoming visible, the unknowns becoming knowns…

Don’t worry about people stealing an idea.
If it’s original, you will have to ram it down their throats.
– Howard H. Aiken

…in reality, it seems that there are very few truly new systems created. Craftsmanship is more common than creativity. We are more likely to experience a change in the speed, scale or quality of something that already exists than witness something truly original.

Earlier today, I had a brief Twitter-chat with Matt Ballantine, that started with the following comment: 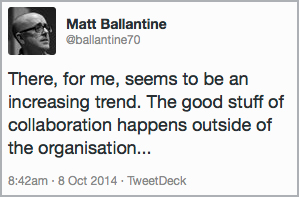 We had a brief banter about how this trend is not new. The most influential collaboration and decision-making has been taking place outside of the organisation for as long as organisations have existed.

But something has changed.

In the past, those collaborations were restricted to the inner circle, the elite few. Making decisions that would impact the many over cigars and brandy at coffee houses and gentlemen’s clubs, retiring after dinner to private rooms to discuss ‘affairs’ considered to be of no interest (or comprehension) to all women and men less wealthy or educated than themselves.

Such an attitude was still commonplace barely 50 years ago. But fast-forward to the present and the view has changed dramatically. Whilst closed decisions are still made at the top of the pyramid in politics and large corporations, technology has democratised the ability to have and share an opinion in every other respect. Collaboration is indeed now happening outside of the organisation on a far wider scale and in real-time. Organisations able to tap into the network can gain the upper-hand over those trying to ignore or block the conversation.

Matt’s right. It is a trend. And it matters. But sometimes we assume something to be new when really it is more of an adjustment, a shift in the balance of power.

I think it is why I get irritated by claims that the ‘millenials’, the first generation to have grown up surrounded by digital technology, are bringing something completely new to the workplace. If that were true, the rest of us would be fighting it instead of embracing a change we ourselves have long desired. To have a stake in the outcome.

Just noticed a related article on BBC News – Doing business the Chinese way. The term they use for external collaboration is ‘guanxi’ that roughly translates to ‘relationships’ or ‘connections’. Having a strong network of mutually beneficial relationships developed outside the formal workplace is seen as crucial to success and clubs have been created to support activities, such as the exclusive China Entrepreneur Club (CEC). As commented in the article:

Leadership expert Steve Tappin says [guanxi] is simply part of the ‘social fabric’. “It’s very difficult to get things done without it.”

But, just as everywhere else, the rise of global social networks is beginning to challenge the merits of belonging to a small exclusive club. Online businesses are beginning to take a different approach:

Longer term, [being online] offers much greater growth prospects than the traditional way of doing business, as it offers the potential to reach a much greater audience, beyond personal connections