With the 2012 Olympics well underway in London, it’s interesting to note the differences between boat races and road races. Winner takes all versus shared rewards 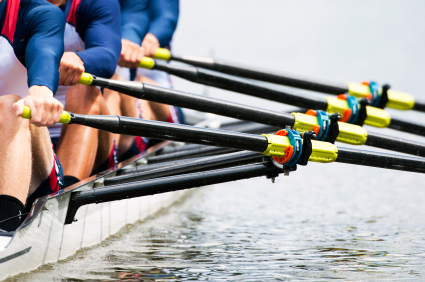 With the 2012 Olympics well underway in London, it’s interesting to note the differences between boat races and road races. In the rowing boat, everyone has to work together for the boat to win. But in road races, a team of cyclists work together with the goal of ensuring one of them can go on to win the medal.

When we talk about collaborative working within organisations, we often generalise and talk about team work. The reality is that most collaborative work is more like cycling in road races than rowing boats. People seek assistance to find answers, gather feedback, make better decisions, improve content and processes. Documents may have many contributors but usually only one author. In most meetings, actions are assigned to individuals, not groups.

Technologies have developed that make collaborative working faster and easier. Connecting with the right people and content should lead to better decisions and actions. What organisation wouldn’t want that?

Yet the most likely cause for collaboration tools to fail is the organisation. Or rather its culture.

In an interview with Brent Schlender, Steve Jobs once said:

The most toxic cultures within organisations occur when departments do not cooperate. In rare circumstances, encouraging departments to compete can work well. But in most cases, you find fiefdoms and inefficiencies as people are forced to work up and down the organisational hierarchy to get anything done. ‘Not my responsibility’ is the antithesis of collaboration and a poorly designed incentive system encourages it.

Whilst collaborative tools can overcome these barriers, organisations will create far more value if incentive systems are designed around collaborative working, acknowledging that individual successes were dependent on a support network.  Reward participation and valuable contributions. It’s not easy. Simple metrics can always be gamed. But that’s what management should be for. Modern managers need to be more like team coaches, able to pick the right group of people for the best possible outcome. And that team will change from one project to the next, along with the leader who takes the lion’s share of credit. Just as with the cycling team, where one member wins the toughest cycling race in the world and then supports another member going for Olympic gold two weeks later.

The answer to the title of this post is simple. The organisation should benefit. But it requires a mindset of working as a team towards the organisation’s goals. The scenarios for working like a rowing team, with equal contributions and rewards, are few. In most cases, collaborative work within organisations is more like the cycling team in a road race. But the difference is that the cycling team still rewards its contributors well. Avoid narrow objectives that incentivise the wrong individual behaviours.

And a final example from the cycling team. Team Sky is the reference point for this post, having recently won the Tour de France (Bradley Wiggins being the overall winner) but the GB group of riders didn’t win the Olympic road race (Mark Cavendish lost out).  And their web site sums up their approach. Whilst images of Bradley Wiggins currently dominate the home page, go view the team area. Photos of 28 riders listed alphabetically rather than by status, and management is just listed by name to the right. The people who deliver the results are what matters – all of them.

Richard Martin has put together a great Haiku deck explaining the process behind co-ordinating the team – Pelaton Formations: An alternative organisational model. Well worth viewing.